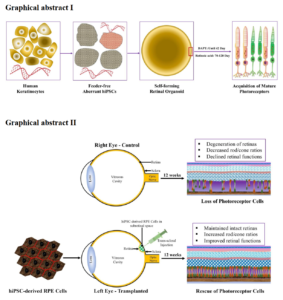 Human induced pluripotent stem cells (hiPSC) technology involve the process of cellular reprogramming by ectopic expression of endogenous transcription factors (also, known as Yamanaka factors), such as Oct4, Sox2, Klf4, and c-Myc in the differentiated somatic cells. With recent innovation in the technology, several improved methods such as episomal vectors, recombinant proteins, mRNA, miRNA, and minicircle DNA-based generation of hiPSC has been revolutionizing the field of cellular reprogramming and regenerative medicine. These reprogrammed cells hold a promising model to study the organoidogenesis and offers unlimited sources of therapeutic cells, like retinal pigment epithelium (RPE), retinal ganglion cells (RGC) and photoreceptors. Thus, hiPSC are promising sources for human tissues, such as retina, brain, and heart, etc. that are inaccessible to investigate. The present thesis focuses on the generation hiPSC from epidermal keratinocytes and differentiated to laminated retinal organoids to model the early eye development and study in vitro retinogenesis. In addition, RPE cells were generated from hiPSC and transplanted to experimental RCS dystrophic rats to assess the therapeutic potentials. First, we demonstrated the rapid and efficient generation of feeder-free hiPSC from the keratinocytes. The established hiPSC line (TCIERi001-A) was registered in human pluripotent stem cell registry (hPSCreg), a European online database funded by the European Union Grant agreement. hiPSC demonstrated the typical characteristics of pluripotency, which was maintained for several passages. But hiPSC at passage 16 showed cytogenetically mosaic with normal and abnormal karyotypes, as well as the loss of chromosome 8q. Despite this aberration, hiPSC was differentiated to organoids with retinal cell fate specification. The formation of organoids was autonomous, but Notch inhibitor (DAPT) was used from days 29–42 of culture that revealed the improved specification of the retinal neuron. Also, retinoic acid was used at days 70–120 that led to the maturation of photoreceptors. Organoids showed all subtypes of photoreceptors that was positive for RHODOPSIN, B-OPSIN, and R/G-OPSIN cells. Also, the photoreceptors acquired the advanced maturation that demonstrated the formation of sensory cilia and the formation of the outer-segment disc. Overall, aberrant hiPSC were permissive to the formation of 3-D retinal organoids. Secondly, functional RPE cells generated from hiPSC at passage 4 revealed the characteristics of naïve RPE cells. These cells were transplanted in 3-week-old pups of RCS rats that influenced retinal functions by trophic support and rescue of photoreceptors until 12 weeks. To conclude, retinal organoids and RPE cells derived from hiPSC could be used as a model to retinal diseases.

How CRISPR lets us edit our DNA | Jennifer Doudna

You may have missed

Reopening community and living with coronavirus – no other option

After lockdown, only option available is reopening community and living with coronavirus

Global Wave of Antibody Testing: Key to Open Lockdown But Too Early for Nepal